Why is MugStock moving site?

We realise that many people are sad that MugStock is moving away from Mugdock Country Park, however it was a decision made in the best interests of our whole community and the future of the festival. Please don’t worry, it’s the same team, with the same ethos and ambition – we’ve just got some more room to play with. The new site is truly stunning and provides an opportunity to create Scotland’s most accessible small festival…

Pictures of our new site 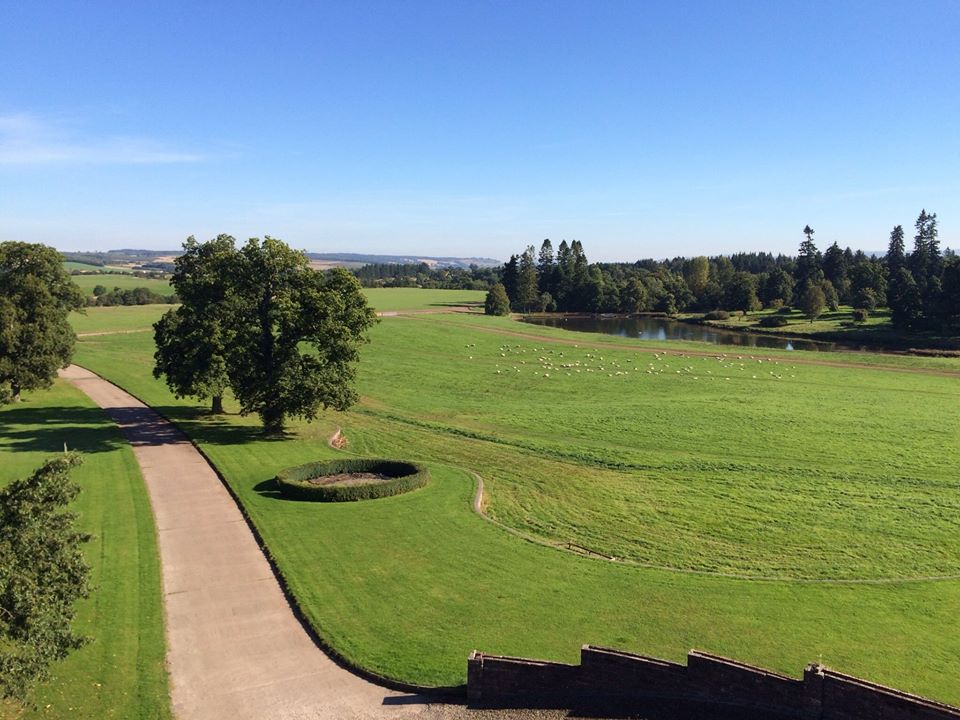 A view of our main arena field (taken from Strathallan Castle)

A view of our main arena field (taken from Strathallan Castle) 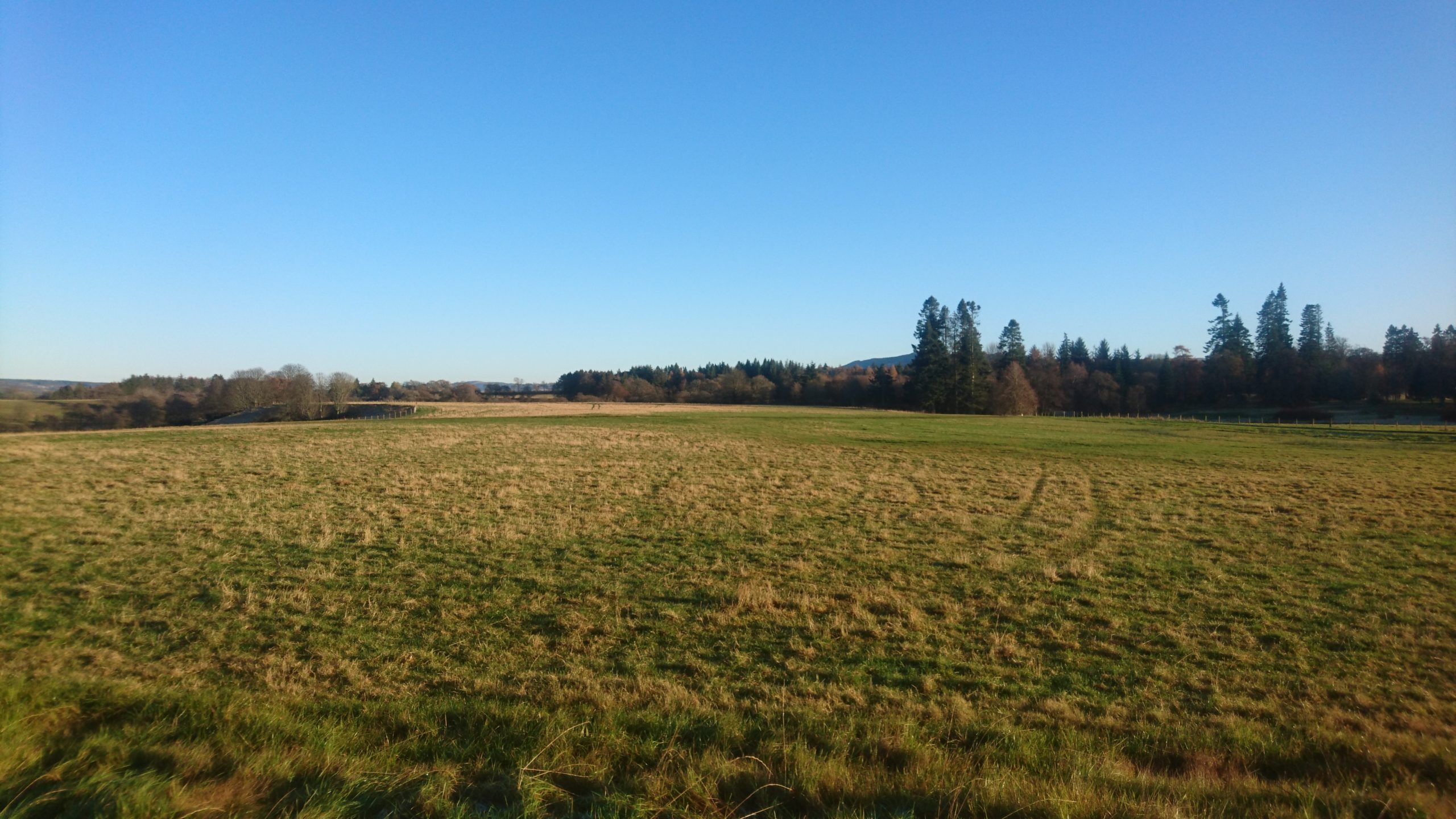 One of many fields available for us to provide exceptionally coinvenient camping, car parking and live in vehicle pitches

Looking across the loch toward Strathallan Castle

We’ve been really touched by the strength of feelings expressed as members of the MugStock community responded to yesterday’s news that MugStock is moving in 2020, from our original home at Mugdock Country Park, to Strathallan Castle, near Perth.

As you can imagine, a move like this does not happen overnight. We’ve known for a while that Mugdock probably wouldn’t be our forever home. When our volunteer led team started MugStock in 2015 we wanted to create an alternate reality; a fantastic world full of music & merriment which is a million miles from normality, but in which paradoxically you can be yourself. Years before the first MugStock we could already picture how fantastic the park would look and feel when augmented with music and camping and general nonsense. And we were right.

Mugdock Country Park is a quirky, unusual location for a festival with lots of little nooks and crannies and less large, flat bits of ground than our fantasy festival site plan would have proffered. The park team were so accommodating and supportive of MugStock, letting us explore different ways of making the most creative use of the available land, but this never quite addressed the fact that there was always just a little less of it available than would have been ideal. At our projected capacity of 1500 we could probably have managed one more year at Mugdock, but that would be us at our very limit. We want the festival to grow over the next few years. Not by a huge margin – we emphatically are not setting out to produce the next T in the Park – but if we can welcome a few more nice people we can increase our programming budget and book some more established acts which are just outwith our grasp with our current stature. As we had already taken a year off in 2019 it felt like a good time to initiate the lengthy process of changing sites. Hesitating to take this leap of faith would have been delaying the inevitable.

And as magical a setting as Mugdock Country Park is, it came with its own challenges. The park remained open to the public throughout our build, production and breakdown. Mugdock is one of Scotland’s top natural attractions, and our production coincided with some of the biggest demands from dog walkers and day trippers. Operating a live construction site full of families and dog walkers in one of Scotland’s busiest parks has been a juggling act. A lack of sufficient car parking spaces exacerbated by us using the park’s overflow car park as our main arena necessitated the hire of a field 1 mile from site for car parking and camping, serviced by shuttle buses, and we had to pay to suspend parking on the narrow road, then organise enough parking spaces for the public as well as our ticket-holders. With all these things come obvious and more subtle cost implications. There were quite a few factors outwith our control at Mugdock which forced us to compromise on the way we set up and ran Mugstock for our visitors. Squeezing in space for traders and crew camping was always a struggle, and there just isn’t room to grow. We had set out to create an alternate reality, but increasingly what we were getting was more of a reality check. At Strathallan we will have a site all to ourselves and the ability to create the type of fully immersive festival environment we know our community will love to share with us.

MugStock was conceived as an alternative to much larger events like T in the Park. For Mugstock directors Nelson and Govan T was our first festival. It was back in the hazy mists of the late 90s, several years before we would meet at Glasgow Uni and go on to dream of one day running a festival together. Our 18 year old selves crowd-surfed, moshed and indulged, geeked out at all the awesome stages and other infrastructure, lamented the price of a pint of Tennents, and bored our friends with excited ramblings about all the things we’d do differently, and all the little touches we could add to the festival experience, given the chance to do it ourselves.

So MugStock probably wouldn’t be what it is without T in the Park. Kudos and thanks to DF Concerts.

But as we’ve grown older we’ve found ourselves gravitating towards smaller, independent festivals like Kelburn Garden Party, Knockengorroch, Doune the Rabbit Hole, the much missed Insider Festival, and Eden. Those curious to know what MugStock might look and feel like in a few years time could do worse than to study the trajectories of these inspiring, unique and characterful events, more-so than the non-camping, big name festivals which have Scotland’s music fans flocking to our cities – in stark contrast to a few years ago when hundreds of thousands of Scots headed to the countryside to camp at festivals such as T in the Park, Wickerman and Electric Fields, all missed by many. The world and the festival scene are changing rapidly, and part of our decision to change site is adaptation with a view to survive. It’s a precarious time for music festivals, and at Strathallan we’ve found a site which provides some (literal and metaphorical) foundations from which to further catalyze the community, creative, connective and cultural impacts which MugStock has been so highly praised for delivering since 2015.

So… We’ve had quite a while to get used to the idea that MugStock could still be MugStock, even it is wasn’t at Mugdock (and anyone who has studied the etymology of T in the Park or Doune the Rabbit Hole will realise that our stubborn refusal to let go of our beloved name is not unprecedented). But in our excitement and the frenzy of preparing to make yesterday’s announcement, we were less than conscious of the fact that our community would still have to process the fact that we were leaving our beloved Mugdock. We were a little surprised by the strength of feeling, but the feelings of disappointment are so completely understandable, and deserve to be heard.

We are sad too. Mugdock has been our home and inspiration. We’ve got more than a little love for the place, and for the local community who got so involved with the festival. So we are heavy hearted. We’ll miss being there. But we’d be devastated if we thought that we could move sites and not be missed!

We hope that if you liked what you’ve seen us do at Mugdock you might just be curious enough to follow us up the road and see what we are capable of creating at Strathallan. We’re very confident that returning MugStockers will feel extremely at home at the new site. It really is a beauty!

Some people will take a little longer to travel (1 hour from Glasgow, 1 hour 5 mins from Edinburgh), and of course it’ll be nearer for some (around half an hour or less from Stirling, Perth and Dundee). We look forward to meeting our new neighbours from Auchterarder, and across Perth & Kinross. Once you get to the site, everything (including car parks, camp sites and stages) will be within easy walking distance. So you may spend a little more time on the road, but without long walks for heavily laden campers, or shuttle bus queues, there’s an extremely good chance that the time it takes you from leaving home to being in the thick of it and enjoying the festival may be less at Strathallan than at Mugdock.

An understandable concern which a few people expressed is the worry that because we are on a bigger site, we may be tempted to put on a much bigger event and lose the heart and essence of what MugStock is all about. Our resolute intention is the complete opposite. We’re using just a fraction of the space of T in the Park which utilised pretty much every square inch of the estate.  We have our pick of some stunning, flat, well drained spaces where tent pegs go in the ground easily, cars will get parked quickly. There’ll be less sprained ankles and more room to dance and to play. Ironically, having more highly suitable land at our disposal allows us to put everything closer together!

Our site plan, programme and marketing strategy have all been carefully designed to maintain the safe, chilled, intimate atmosphere which we have been so often praised for creating. We know we can create the same and better at a different site. MugStock is flying the nest and it’s all for the best. and we’ve not burned any bridges. We’re still on great terms with our founding partners at Mugdock Country Park and have a strong intention to run more events there in future. In the meantime we really won’t be too far away. Our new site is an hour from Glasgow and there will be bus links between the site, Gleneagles Train Station and Auchterarder Bus Station.

We are excited to move forwards with the aim of securing MugStock’s place in Scotland’s festival landscape for many years to come. We hope that you will understand our decision and want to be part of the next chapter in ye olde book of MugStock.

Thanks for everyone who cares about the future of MugStock.

We’ve decided to wait just one more year before bringing MugStock to Strathallan Castle, and it's because we want the longterm best for our festival, and for Scotland's Independent Festivals... 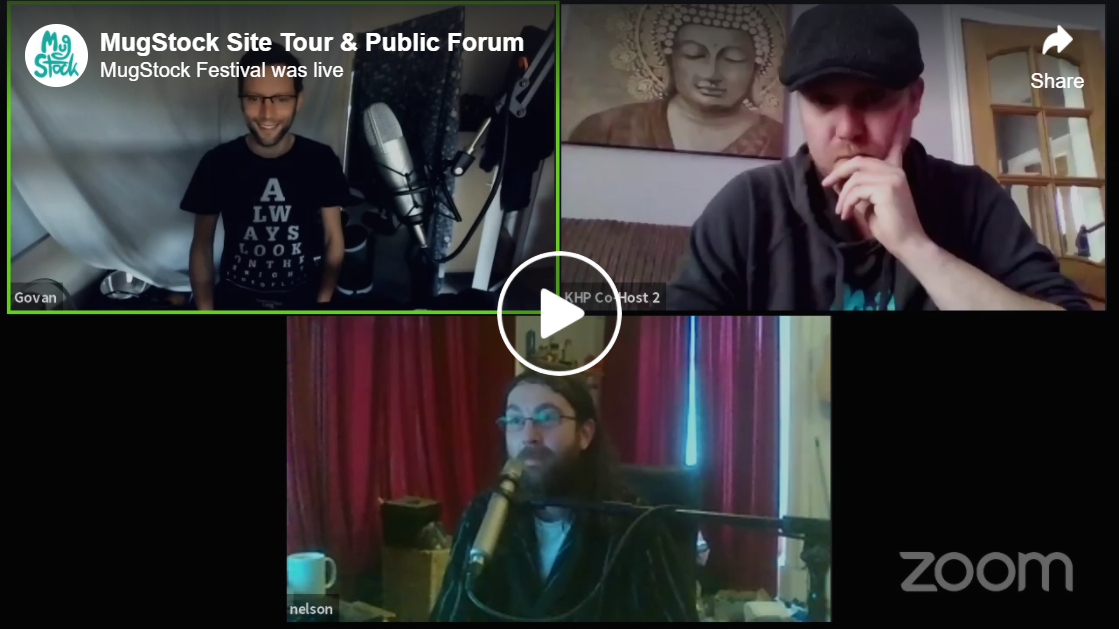 We Called That MugStock – What You Missed

We had a lovely weekend pretending it was MugStock, and looking forward in salivating anticipation to the triumphant return of festival season. We made some announcements, we shared our site plans,... 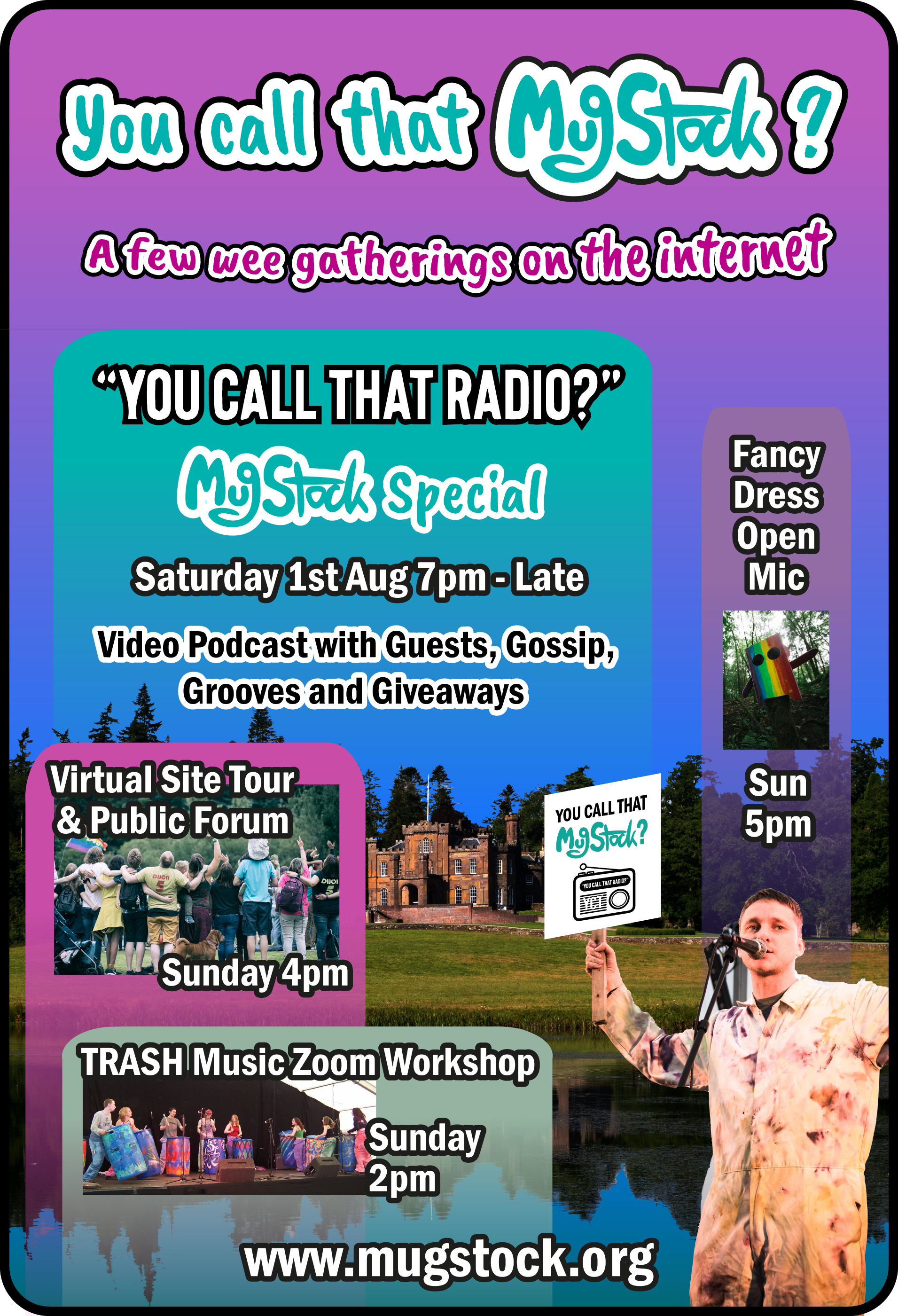 We can't believe that MugStock's debut at Strathallan Castle would have been next weekend. To mark the occasion, with just over a year until this dream becomes a joyous reality we are going to be... 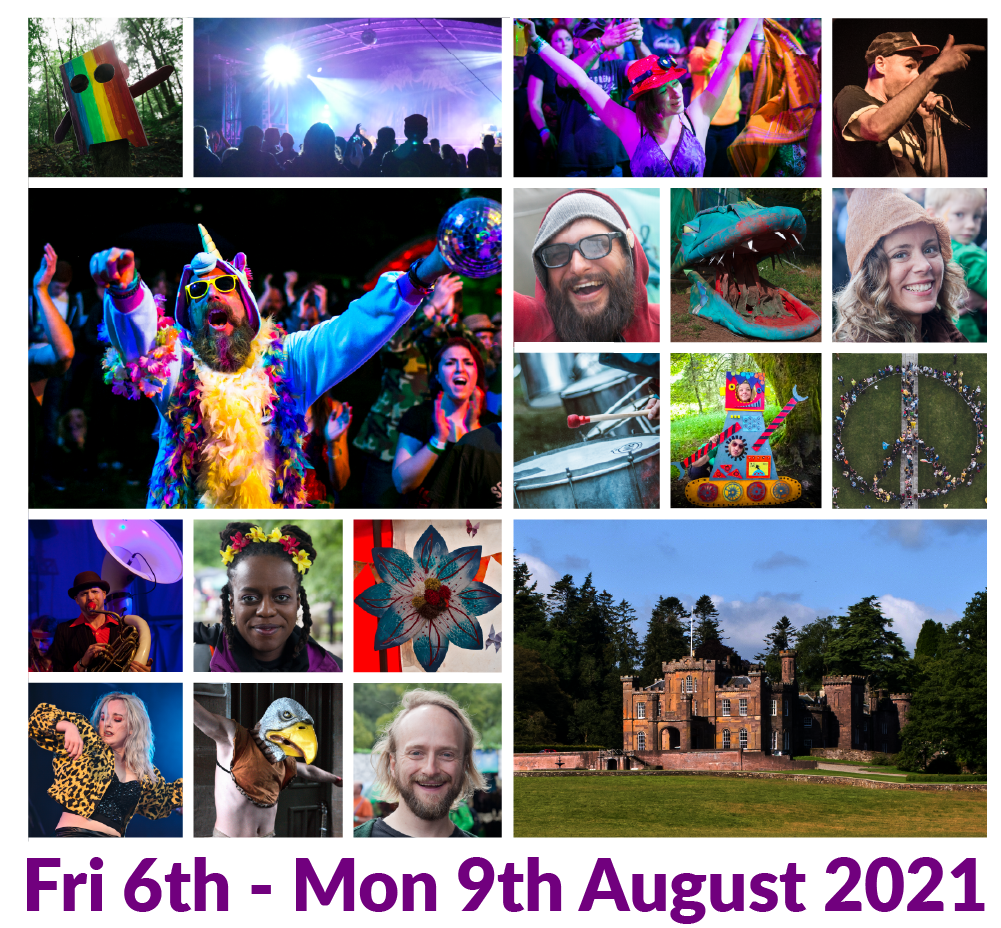 MugStock 2020 will not go ahead. MugStock exists to bring happiness, culture, music, and space for a good boogie with family, friends and strangers. Sadly, in the current climate, we still cannot be... 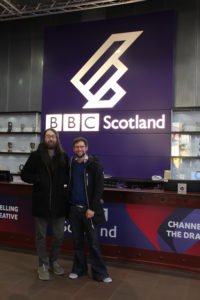 We were delighted that BBC journalist mary McCool decided to write about the relaunch of MugStock and our move to Strathallan Castle. Mary interviewed Mugstock directors Nelson and Govan for the... 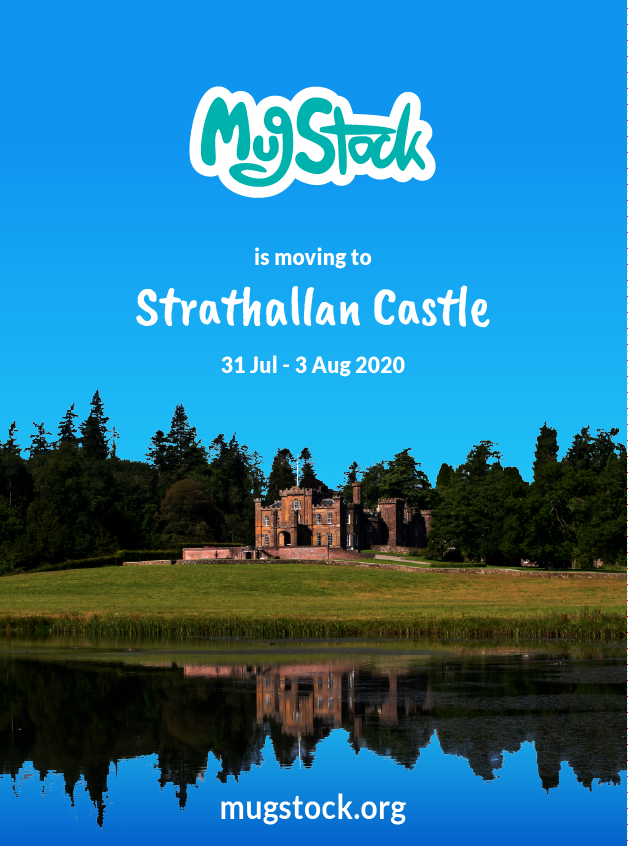 MugStock has found a new home at Strathallan Castle. MugStock 2020 will take place on the castle’s estate over the weekend Friday 31st July - Monday 3rd August. MugStock takes its name from Mugdock...